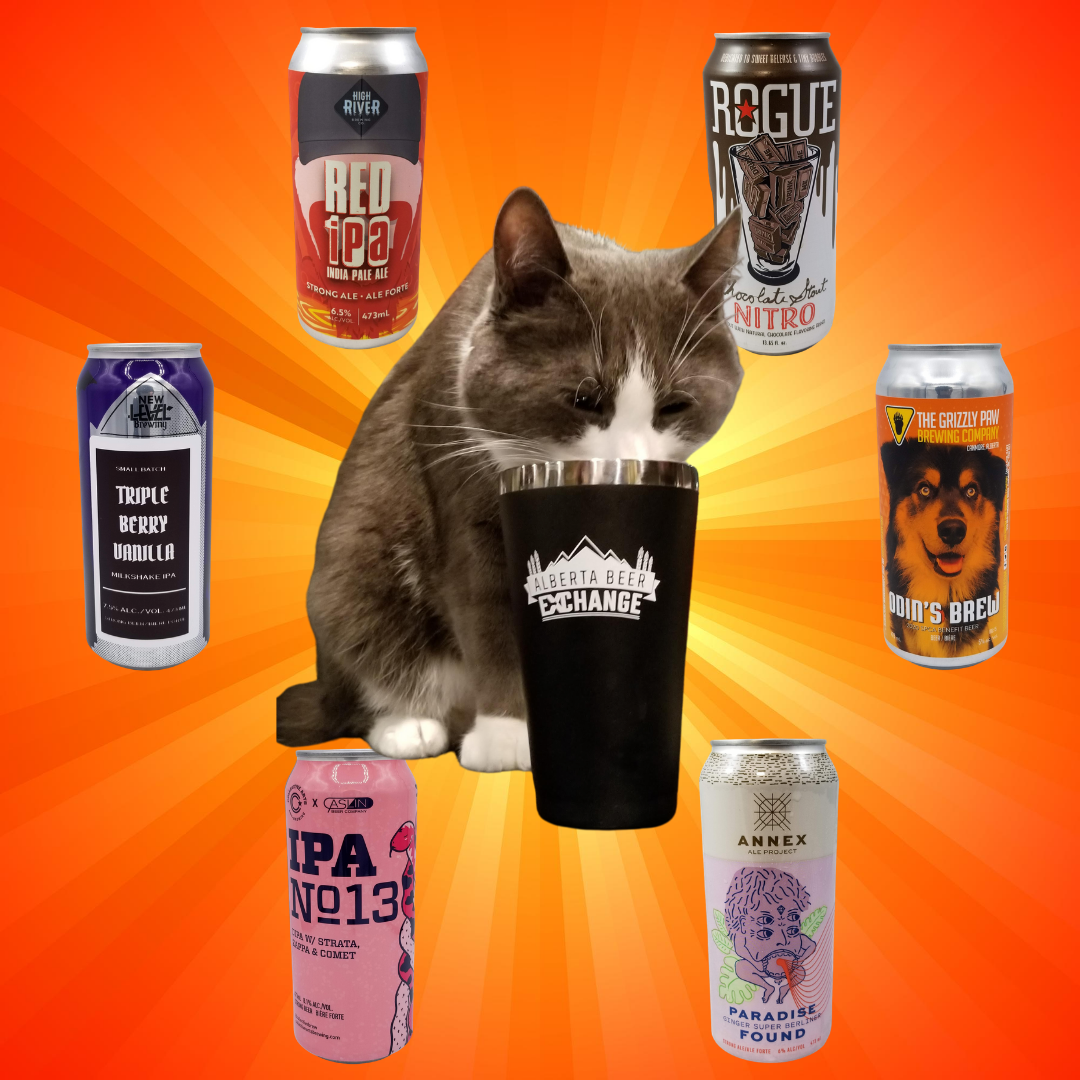 Well, it won't be long before the leaves start turning and the days get shorter. It feels like summer just arrived...but that's Alberta. Here is a pack that will help you transition into fall as you enjoy a few final summer brews and a few maltier beers to get you primed for the cooler weather that is nearly upon us.

Sadly (and also happily), Odin was adopted before this beer even hit the shelves. I mean, look at that furry face! What a charmer. We love our furry friends at ABX and we are huge supporters of the SPCA too! In fact, we adopted our cat, Phil, from the SPCA four years ago and his life has been blissful ever since. This year’s annual Bow Valley SPCA Benefit Brew is brewed with a variety of grains from the Canadian breadbasket, barley, wheat, rye, oats and corn. Packed with flavour, this highly quaffable beer has a nice balanced bitterness and a lovely malty finish. Plus, all proceeds are going to a great cause. It’s a win-win-win!

If there is one ingredient Annex knows, it’s ginger. This brew hits you with a healthy dose of ginger right up front and offers a nice, refreshing, zinginess. Paradise Found was brewed with a wholesome serving of oats, and kettle soured for a lovely lactic tartness and a residual ginger burn. There are still a few nice patio days left and this is a great beer to enjoy while sitting in the low sunny rays that remain. Enjoy with a salad packed with chopped fresh veggies and fruits including cucumber, celery, peaches, and pears.

This is the first New Level Brew included in an ABX Membeership pack, and it is well deserved. New Level Brewing is one of the most style-bending breweries in the city. The Ross brothers decided to open the brewery while attending a death metal festival and it is well known that their branding pays homage to the origin. They aren’t worried about fitting into any style guidelines and just want to make tasty beers. So, is there a better beer to feature in one of our packs than this small batch Triple Berry Milkshake? We think not! This style of beer was first brewed in 2015 to the dismay of some pundits, but to the joy of most craft beer drinkers. Sit back enjoy this sweet fruit bomb of an IPA!

Wow! That was my first thought when this beer hit my pallet. The dank passion fruit, overripe mangos, and tangerine citrus flavor blew my mouth up. Not to be outdone, the beer swiftly transitioned to a sweet candy finish with some residual heat from the high alcohol content. In February of 2017 Collective Arts launched the IPA project series and this lucky No. 13 is a collab brewed with Aslin Beer Company located in Herndon Virginia and the first collab ever in the IPA series. After you’ve had this one, be sure to grab No. 14 which just landed in the store today.

As we continue to move into the end of summer and with autumn knocking on our doors, why not put a beer in the pack that best demonstrates this change. The Red 100 celebrates Kevin, the head brewer and owner’s 100th beer brewed, and we are ecstatic to feature it. A red IPA is categorized as a specialty IPA and is essentially a base red beer that has an increased hop profile. This beer stays true to style by immediately hitting you upfront with the caramel sweetness you would expect from a red ale but transitions into a slightly bitter citrus finish. Pair this one with cooler Calgary evenings as you snuggle up around a fire and watch the leaves change colour.

Oh my! Chocolate lovers rejoice! One sip of this smooth gem will leave you wondering how the heck they got that creamy Dutch chocolate flavour in a beer! And why does it have to end!? Make sure you warm this baby up a bit by pulling it out of the fridge for about 15 minutes before drinking in order to experience and enjoy all the flavours of roasted malt, chocolate, vanilla, caramel, and bitter earthy hops. Who needs s’mores around the fire when you have a Nitro Chocolate Stout?!