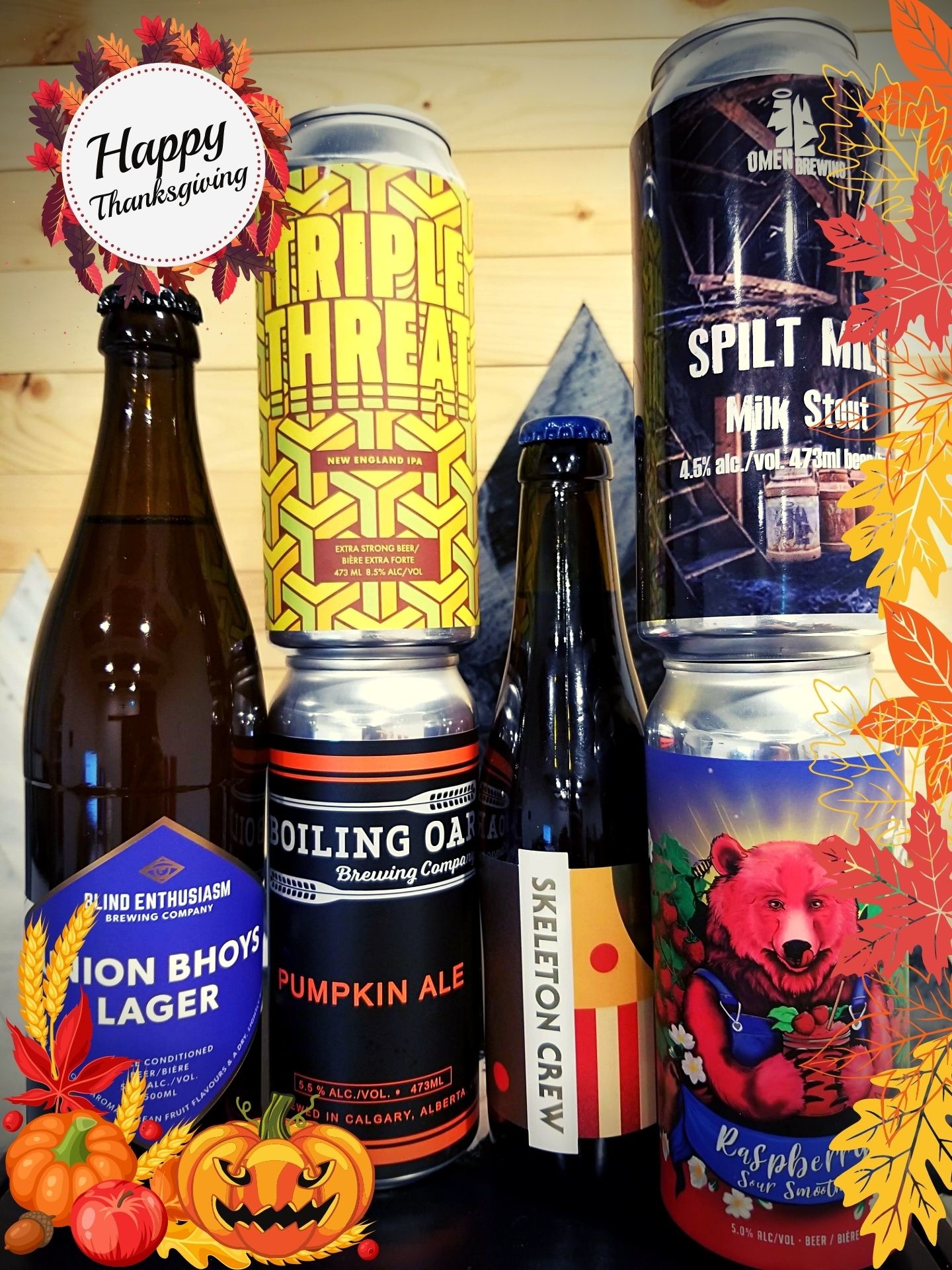 Hey ABXer’s! Corey here rolling at you with another month of the awesome Membeership craft packs and what a treat this one is! Full of sweet decadence, freakshow beers, and rare finds, this one is perfect for the month that hosts both Thanksgiving and Hallowe’en!

A perfect Thanksgiving pre-meal beer, this one is as refreshing as it comes. Brewed by Blind Enthusiasm out of Edmonton, this beer is part of their bottle conditioned lager series. “What is bottle-conditioned” you ask? Simply put, it is the process of bottling beer with live yeast to remove any trace of oxygen and increase the carbonation to ensure a super fresh, highly attenuated beer. A method perfect for lagers! Drink this one cold and when refreshment is needed the most.

It’s official, pumpkin ale season is here and with it comes varying types, styles, and qualities of pumpkin beers. This one is my favorite this year because Mark, the brewer at Boiling Oar, just nailed it! Not only does this beer showcase the lovely fall flavors and spices such as nutmeg and cinnamon, it is also very drinkable and not super sweet. Well done Mark! Yes, we are impressed.

Speaking of pumpkin, enter the freakshow beer of the pack. Can it even be considered beer? Is it too much? I’ll let you answer that one but be prepared for an experience unlike any other. This beer is as close to a breakfast smoothie as I have ever seen. So much so that they didn’t keg any of it because they were concerned that the ridiculous amount of raspberry puree might clog draft systems. Once you pour it, you’ll see what I mean. It’s thick. It’s raspberry-y. It’s delicious! On top of that, it’s super rare. Only 15 cases made their way to the entire city of Calgary and we had to fight off the voracious crowds to hold on to enough for you! Enjoy this freak of nature, Membeers :)

Coming at you with another NEIPA from Cabin, this one combines the awesome hop profiles of Sabro (think coconut), Galaxy (think Passionfruit), and one of my personal favs, Nelson Sauvin (think Lychee). These three hop profiles coupled with a huge malt backbone make this one a hop monster. Best described by the Cabin themselves; “this one tastes like favoritism.” Crack it on a creepy Hallowe’en night but maybe not alone!

Omen Brewing?! Who’s Omen Brewing? It’s a little family owned and operated brewery with three brothers and their dad brewing up a mostly dark-beer line-up. Until very recently, Omen wasn’t canning their delicious brews, so they were very hard to bring in. When ABX first opened last summer, we rotated through all the Omen kegs we could bring home with us because their beers are just so good! When I learned that they were making their way to Calgary to grab some bourbon barrels, I eagerly got them to bring me several flats of all the different dark beers (we are also the only place you can find them in the city). Included in this pack is their incredibly smooth milk stout for those who love an espresso shot with a milky froth.

Welcome Eighty Eight into this month’s Membeership pack and thank you for brewing such a delicious beer! Skeleton Crew is Eighty Eight’s second year anniversary beer loaded with over 20kg of Fig Newton cookies and then aged on American oak and more fresh figs for 5 months (they had lots of time on their hands when COVID-19 hit us). Caramel, molasses, dried fruit, biscuit, and figs! And that is just on the nose! As it warms up, the richness and the 10.8% alcohol shines well. It might not be the first thing you reach for, but it may just be the last!!