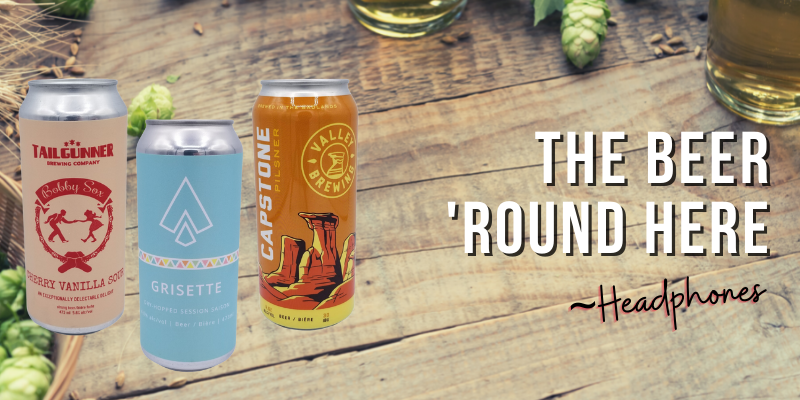 I must admit to being a bit confused when I first looked at this can.  The name, Grisette, is boldly printed on the label but just below that it reads Dry Hopped Session Saison.  I haven't had a lot of experience with grisettes but I do know that they are their own distinct style.  I had a little digging to do.

Both grisettes and saisons are Belgian and go way back in history.  Saison means "season" and was traditionally a low alcohol beer brewed for seasonal farm workers.  Grisette is similar in style but was originally brewed for miners in the Hainaut province of Belgium.  Grisette means "little gray" and there is a bit of disagreement as to whether it refers to the colour of the dresses worn by the women who delivered the beer or the colour of the stone (and it's dust) being mined in the area.  It is argued by some that grisettes should be considered a subset of saisons.  I guess I can live with that.

This beer pours a slightly hazy, yellowy gold with a very gassy head which morphs into larger and larger bubbles as it quickly disappears leaving a few random clusters clinging to the sides of the glass.

The aroma is very inviting with lots of spicy Belgian yeast notes.  The traditional clove scent is quite gentle and well mannered allowing a sweet, slightly bubble gummy aroma to share the stage.  Way off in the background is the slightest hint of barnyard funk.  This is one of the most pleasant smelling beers I've had the pleasure to sniff in a long while.

Initially this beer dances across the tongue with a soft and ever so slightly lemony tartness.  Very soon thereafter the hops assert themselves lending a contrasting bitterness to the finish.

Thirst quenching and very crushable, Île Sauvage Grisette would make an ideal patio beer over the next several weeks of summer.  Rating: B+

Several years ago I was in a well stocked beer store in Seattle when suddenly a customer rushed in and asked the cashier, "Have you got it?" to which the cashier replied, "Yes, we do".  The gentleman hurried to one of the fridges and grabbed a single, green bottle, quickly paid for it and left.  I asked the cashier what that was about and he told me that this particular customer only ever bought one kind of beer and that it was Pfriem Pilsner from Hood River, Oregon.  I was intrigued and bought one.  I'd long been a fan of Pilsner Urquell, the great Czech pilsner, but this was the first North American craft pilsner that I'd ever had.  It was crisp, clean, and very thirst quenching and started me on a hunt to find a pilsner that good available in Calgary.  For the longest time craft pilsners were very few and far between and when I did find one I was always left wanting.  I'm happy to report that in the last few years they have been popping up left and right and have been getting better and better.  I had to wonder if Capstone would be able to hold it's own among the many decent to great pilsners now available.  The day I chose to review this beer it was 30C outside and 27.5C in the house.  If ever there was a day to crack a fridge cold pilsner, this was it.

The beer poured a very light gold with a modest, gassy, white head that was gone in a flash.  A very biscuity aroma from the malt was present and was followed by a light, grassy note from the hops.

My first sip confirmed that yes, Capstone could stand proudly among the other pilsners on the shelf.  It is in no way a complex beer but it's moderate bitterness from the hops and moderate sweetness from the barley balance beautifully.  It finishes quite quickly on the palate but that simply invites the drinker to go in for another satisfying sip.  This is exactly what I'm looking for in a cold, dust cutting, thirst quenching pilsner.  I could easily down five or six of these at a mid August BBQ.  Rating: A-

Over the past few years the number of craft sours has increased exponentially.  The results have been mixed, to say the least.  A few of them have been sublime and a few have been dreadful.  Most of them have been fair to middling.  In my experience, the most successful have been the ones that pick a single fruit flavour to highlight.  The most disappointing have tried to mix two or more flavours and wind up being less than the sum of their parts.

I was a bit apprehensive about trying this beer.  I'd had a cherry sour a couple of months ago that left a bad taste in my mouth.  In addition, I'm not a fan of vanilla in my beer unless it's a hint of vanilla picked up from barrel aging.

The first thing that struck me about this beer was it's absolutely stunning colour.  In fact, it might be the prettiest beer in a glass that I've ever seen.  I had a hard time trying to figure out what to call it as it was a colour I can't remember ever seeing before.  The closest I can come is to say it reminded me of a perfect red plum.  The frothy head was a lighter version of the beer itself but, sadly, was soon gone.

The aroma was, not surprisingly, cherry and vanilla.  It reminded me of the old (1890-2008) Cherry Blossom chocolate bar that some of you may remember.  Quite a pleasant bouquet I have to say.

The taste is where this sour begins to fall apart for me.  I tasted cherry and I tasted vanilla but they didn't meld in the way the nose had promised.  It felt like two flavours forced together, each trying to assert themselves.  The cherry had a weird bitterness that reminded me of when I was a kid and broke open a cherry pit to see what the seed inside tasted like.  It was the same bitterness that had put me off of the cherry sour I had tried before.  The one positive was a hint of pie crust that lurked in the background.

If you love cherry and/or vanilla by all means give Bobby Sox Cherry Vanilla Sour a try.  If you're looking for the next great sour, this ain't it.  Rating: Colour A++  Taste C